How did you become a Steelers fan?
Ages and ages ago, when I was a kid. It was basically because they played in black. My school mates and I were collecting player cards; I had a couple of Rod Woodson and Barry Foster cards and just thought ‘hmm these guys are pretty cool’. Pretty exciting times! I had a Neil O’Donnell one too, but I gave it to my mate who supports the Cowboys

Since our last Super Bowl win we’ve missed the playoffs a couple of times and not been challenging for the division as much. How do Steelers fans feel about the Ravens these days?
These days it seems you guys are pretty hopeless unless you’re playing us. Obviously living here in the UK, I’m not as in touch as the average fan. These days Facebook is full of people saying they will never watch the Steelers EVER AGAIN because of their anthem protest.

A couple of seasons ago I think beating you guys would’ve been everything because it meant the winner would go and lose to the Patriots in the play-offs. Nowadays I kind of feel the division is in the bag.

What games between our teams stick in your memory?
The 2010 divisional round game where we went down like 21-7, but came back and won 31-24. It’s a while ago so I can’t really remember what happened in the game beyond the many rituals performed, praying to the football gods for touchdowns and the adrenalin come-down after the clock ran down

Another one is the game right at the end of last season. Antonio Brown scoring that touchdown by reaching across the goal line while being tackled by three guys. Such a nerve wracking game and showed what it takes to have to beat you guys sometimes.

Which Ravens player do Steelers fans dislike the most?
Hmm, this is a tough one nowadays – you don’t really have any stand out bad guys like the Bungles have with Burfict and Pacman Jones. I guess Suggs is the guy on the Ravens side, but like I said you guys aren’t really that memorable at the moment.

Thing is you guys just get down to business, even in the games where you beat us like 35-7 or whatever, Harbaugh just got on with the next game. Unlike the Bengals, who I suspect pay people to come onto the Steeler boards and remind everyone about the result like it was the Super Bowl win they’ve spent forever waiting for

If you had to pick a favourite Raven, who would it be?
Definitely Justin Tucker, mainly because of this picture, despite it being a photo showing me my team lost yet another game they should’ve won. 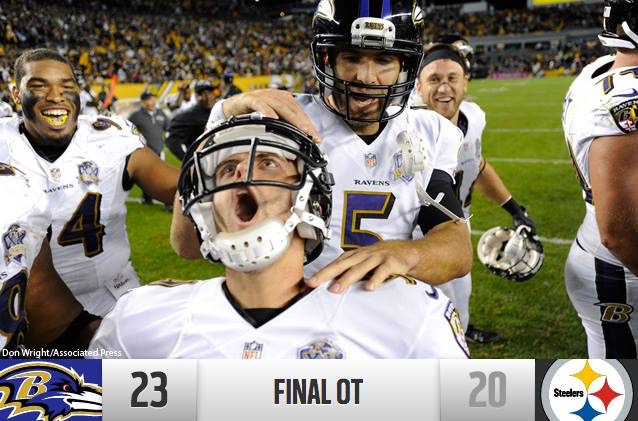 How has your season been so far and how do you feel about the season ahead?
It feels a bit like last season. I expect them to win the Super Bowl, but a couple of weeks into every season we get dealt an absolute crushing defeat that makes me wonder why I’ve shelled out for Gamepass. Last year it was week 4 at the Eagles and this year it was Chicago.

We will more than likely bounce back in the next game, but like last season it leaves a massive question mark hanging around until the inevitable knock-out game in New England, which we will probably lose.

Thing is, on paper I think we’re better than last season. Three good receivers, a set of decent LBs now and the secondary is kind of alright so – who knows!

What would you say are the key areas of this Sunday’s game?
If we can’t stop the run then we are going to lose. Honestly, against the bears my grandma would’ve got 100 yds and a touchdown. Jordan Howard even had something up with his shoulder. I can just imagine the coaches on the sideline: “Um … I think we should run it again”, “Yep, good idea”

Having spoken to you yesterday, if you really have no running game then we’ll be ok. It’ll probably be a frustrating three hours though