Shane Richmond went to watch the Ravens practice in London and met a Ravens legend.

Lardarius Webb was the player I spotted first. He was in full uniform and pads chatting with a some teammates. I would like to be able to tell you who they were but they were lost amid brain-befuddling excitement. My internal monologue went something like this:

“I’m at the Ravens practice. In London. The Ravens are practicing in London and I’m here. I’m definitely here. And they are definitely here because, look, there are Ravens everywhere. And… holy crap, look at Ryan Jensen’s hair!”

Hazlewood, in Sunbury, South West London, is a 63-acre site and training ground of London Irish, the rugby team. Unlike Baltimore’s imposing ‘Castle’ training facility, this is a plain building that could be any local sports centre. For this weekend the Ravens had taken over and somehow I was there, watching the players stream onto the field on a bright and warm September afternoon.

Some acknowledged the journalists, most just started warming up. Anthony Levine playfully dragged Patrick Onwuasor over in front of the cameras, pointing to his fellow linebacker and loudly telling us to make sure we got a picture of a future star [see photo at the top].

After warm-ups, Joe D’Alessandris took his offensive lineman through their drills, while AC/DC’s Back in Black blared from the sound system at ear-splitting volume. (He eventually asked for it to be turned down because the players couldn’t hear him.) Behind them, the offense ran plays against a defensive unit wearing yellow bibs to simulate the Jags. 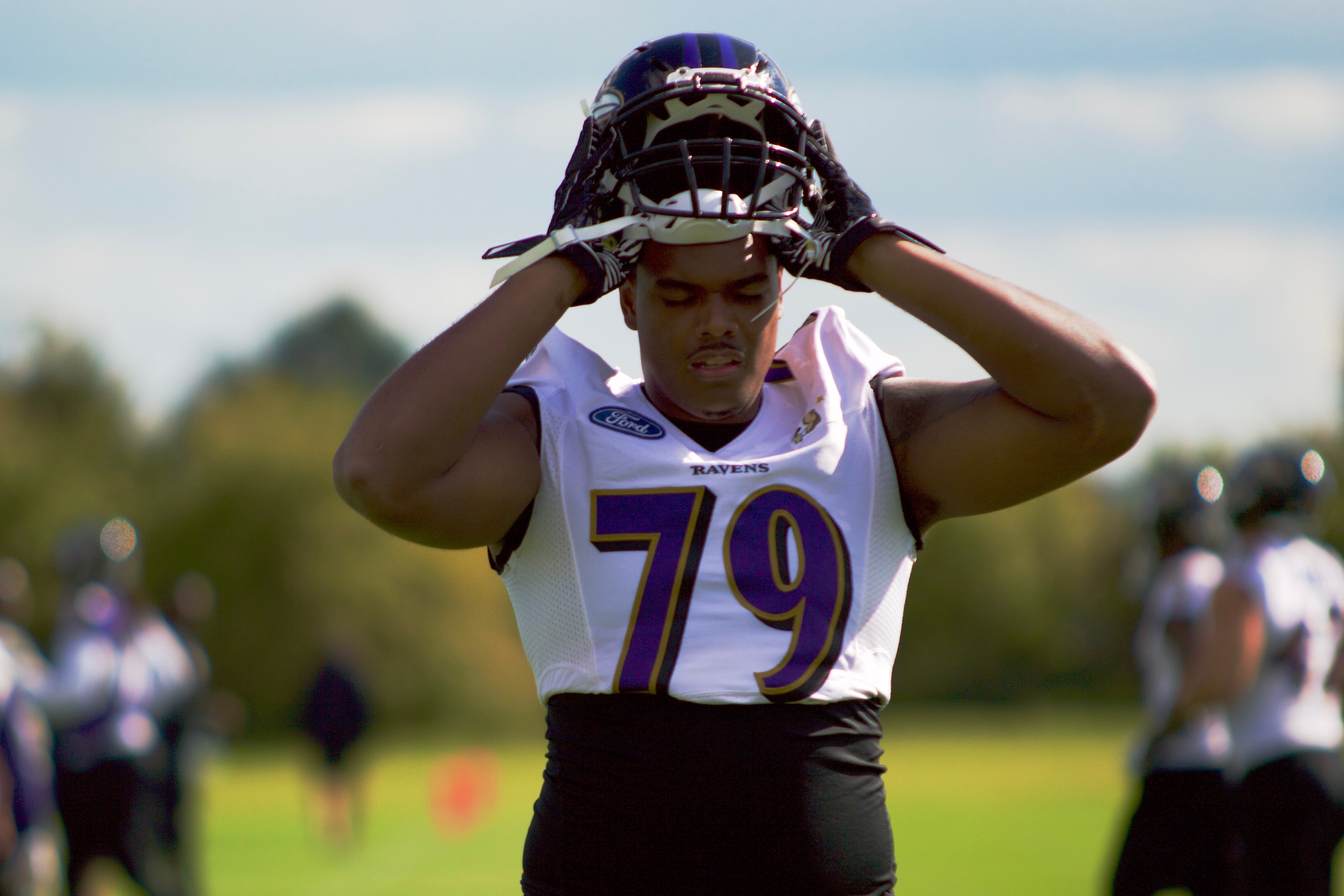 I saw Michael Campanaro make a long reception downfield on one play, while Alex Collins broke out to the side with a phenomenal burst of speed on another. Mostly they were too far away to see much. I’m not sure who was throwing passes but it wasn’t Flacco, Mallett or Woodrum. They were throwing together on a separate field.

Once the QBs made their way over, we were told we could take pictures only of the players in purple – the defense. The offense, in white, was off limits. A little more of that and we were sent back to the clubhouse to wait until practice finished.

Eventually we were called back out again for the press conference. Most of the players streamed off the field and back onto the bus. John Harbaugh stopped by to say the trip over had been fine and practice had gone well. Then Joe Flacco arrived to say much the same thing.

Finally, Jermaine Eluemunor answered questions. His background – a Londoner who first saw American football when he was flicking through TV channels and chanced across the first International Series game at Wembley – made him one of the most in-demand players of the day.

After that there were only a handful of players still around. I grabbed a picture with Eric Weddle, who was very friendly, and wished him luck as he headed for the bus. I was hoping to catch Harbaugh but Weddle poked his head out of the bus door and yelled “Harbs, we’re leaving!” and the coach was hurried away.

Walking back to the clubhouse once again, I spoke to a couple of journalists who were coming the other way. “I’m going to see if I can get Ray Lewis to sign my jersey,” one of them said.

And indeed he was, coaching the school kids through some flag football along with Hall of Famer Jonathan Ogden, Jermaine Eluemunor and the Ravens’ practice squad players.

And so it was that a few minutes later I was shaking hands with one of the greatest players, not just in Ravens history but in NFL history.

It wasn’t a game or a trip to Baltimore but that sunny Friday afternoon in London will always be one of my greatest memories as a fan. The game on Sunday that followed it? Well, not so much.